Audrey’s Magic Nine
Written by Michelle Wright and illustrated by Courtney Huddleston, Francesco Gerbino, and Tracy Bailey, this webcomic centers on a black orphan adopted by a well-meaning but clueless suburban white couple. 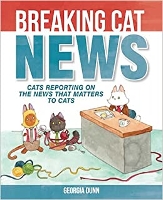 Breaking Cat News
House cats Elvis, Puck, and Lupin report on such breaking news stories as “The people are missing!” and “There’s a box with a towel inside it on the kitchen table.”

Cucumber Quest
In GiGi D.G.’s video game–esque tale, adorable Cucumber the bunny and his sister Almond go up against a series of baddies. A vibrant palette, nonstop action, and a bizarre cast of friends and foes make for immersive reading.

Ozy and Millie
Two anthropomorphic foxes navigate the world in this sweetly snarky webcomic, now a graphic novel by Dana Simpson, creator of the best-selling “Phoebe and Her Unicorn” series.

Scared by the Bell
Though being the new kid is never easy, it’s especially hard for Peter, an average kid whose classmates include a mummy, a pumpkinhead, and a skeleton.

Wormworld Saga
Still reeling from the loss of his mother, Jonas escapes into his vivid daydreams. After making his way through a portal in his grandmother’s strange painting, he finds himself lost in a fantasy world, unable to return.

As Per Usual
Dami Lee’s self-deprecating webcomic details her quest “to be a real lady person,” from dating woes to FOMO in the age of social distancing.

As the Crow Flies
Two outsiders endure microaggressions on a Christian backpacking trip and find solace in each other. Melanie Gillman’s contemplative, poignant webcomic was published as a graphic novel by Iron Circus Comics and won a Stonewall Honor in 2018.

Bird and Moon—Science and Nature Comics
Whether naturalist and science writer Rosemary Mosco is describing how to distinguish a dolphin from a porpoise, offering improvements on bird species, or urging readers to join the fight against climate change, her abiding passion for the natural world comes through loud and clear in this delightfully quirky webcomic.

Check, Please!
When a happy-go-lucky former figure skater joins his college hockey team, hilarity ensues, but so do lasting friendships and even a burgeoning romance between protagonist Bitty and team captain Jack.

Cheshire Crossing
What became of Alice, Wendy Darling, and Dorothy Gale after they returned from Wonderland, Neverland, and Oz? Though few believed their stories, the three girls meet and find kinship in one another.

DeadEndia
Hamish Steele’s webcomic, centers on an amusement haunted house with a mysterious portal that entices demons, ghosts, and angels.

Heartstopper
Since 2016, Alice Oseman has been chronicling the burgeoning romance between Nick and Charlie, two secondary characters from her prose novel Solitaire.

Space Boy
To make the long trip back home to Earth from a mining colony deep in outer space, Amy and her family must be cryogenically frozen, and when Amy returns, her friends are far older, and she’s not sure where she fits in.

Witchy
Ariel Slamer Ries’s webcomic, now published in graphic novel format, takes place in the magical world of Hyalin, where witches’ magic depends on the length of their hair. But revealing one’s power can be perilous.

Looking for more? Try Comics Plus and find thousands of digital graphic novels and comics! Free to use with your library card!

My name is Janet and I am the Youth Services Librarian. I can usually be found at the Children’s Desk or in my office planning the next fun program! In my free time I love to read (of course!), see friends and family, do puzzles, and be outside as much as possible. My favorite authors are J.K. Rowling, Jane Austen, Roald Dahl, Kate DiCamillo, and Agatha Christie.

Too much screen time? What about a podcast? These are designed for kids! Tumble Science Podcasts for Kids: Meant to be

Are kids getting confused with schoolwork? Tutor.com can help!  This is a FREE resource where kids can meet virtually with a